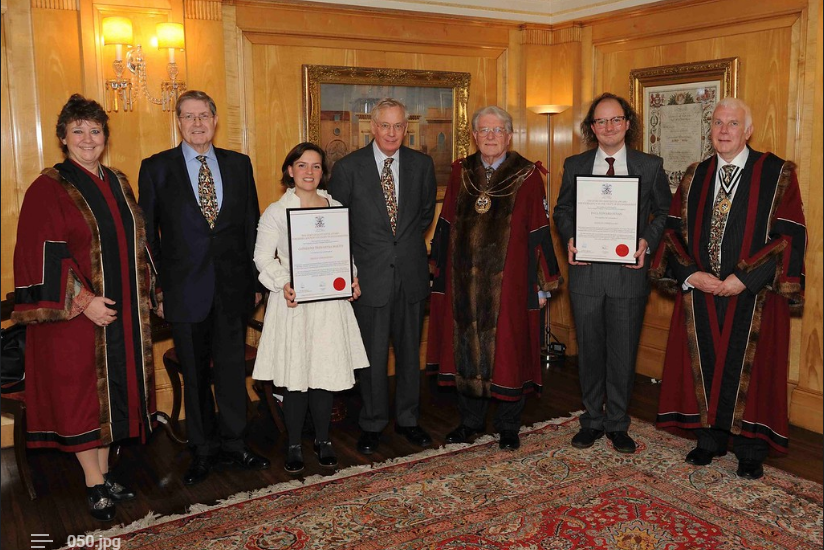 This year’s prestigious Award is shared by two outstanding masons

The Duke of Gloucester Awards recognise the skills of craftsmen and craftswomen who have gone through a recognised apprenticeship for their craft, achieving a City & Guilds Craft and Advanced NVQ Level 3 at an approved college, and have between two and nine years post qualification experience. The Award recognises the skills of those having the ability to go on to be leaders in the world of stonemasonry.

Catherine Martin and Paul Synan share the 2019 Award and were celebrated at the presentation evening on 27th November, 2019 at Mercers’ Hall in the City of London.

Catherine Martin is a stonemason, sculptor, carver, letter cutter and conservator. Catherine recently designed and carved plaques for Liverpool Anglican Cathedral, the Tallow Chandlers’ Company and the Worshipful Company of Masons, and completed stonework projects for Worcester Cathedral and All Souls College, Oxford. Graduating with a BA (Hons) Fine Art, Sculpture from Chelsea College of Art in 2005, she completed her Stonemasonry Diploma and NVQ 3 in Banker Masonry at the Building Crafts College in 2009. Subsequently, Catherine completed an apprenticeship at York Minster in 2012 and graduated from the Cathedrals’ Workshop Fellowship (CWF) Foundation degree programme in 2013.

Catherine is a Freeman of the Worshipful Company of Masons and is married to Richard, also a stonemason and Freeman of the Company. They live in Great Malvern with their young son, Maximus.

Paul Synan has worked as a Stonemason at Gloucester Cathedral since January 2015. Achieving a BA in Ancient History at King’s College (London) in 2008, followed by an MA in the same subject in 2010, Paul undertook the City and Guilds Advanced Diploma in Banker Stonemasonry and Level 3 Banker Stonemasonry at the Building Crafts College. Paul gained a Building Craft Apprenticeship with the Prince’s Foundation for the Built Environment where he achieved an NVQ 3 in Heritage Masonry. He achieved a Merit at graduation from the Cathedrals’ Workshop Fellowship (CWF) Foundation degree programme in 2019.

Paul is a Yeoman Mason of The Worshipful Company of Masons and is married to Hannah, a teacher of English, and they live in Stroud with their two young children, daughter Ida and son Moses.