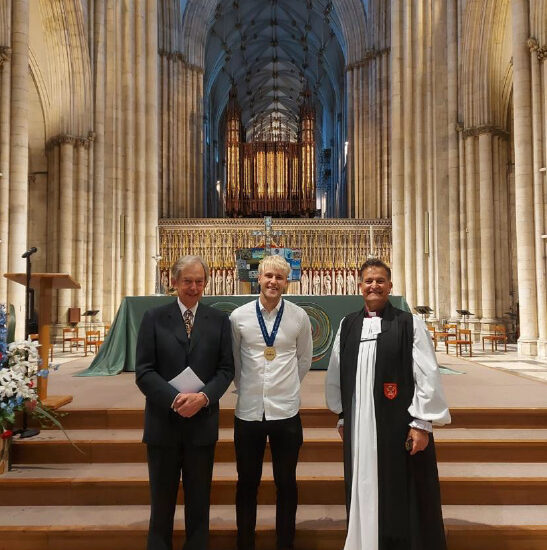 James with the Dean of York, the Right Reverend Dr Jonathan Frost and Liveryman Richard Carr Archer. (formerly Surveyor of the Fabric at the Minster).

James Digger, a Stonemason at York Minster, was presented with a Company prize by the Dean of York at a special evensong service in the Minster on 26 September 2021.

Throughout his apprenticeship at the Minster James attended York College, and it was during this time that he won the Gold Medal for Architectural Stonemasonry in the UK Skills competition 2019.  James was subsequently selected to join the WorldSkills UK team, representing the country at the International Architectural Stonemasonry Competition in Shanghai planned for 2021, but the event was subsequently cancelled due to Covid19.

The Masons’ Company is delighted to mark James’ UK Skills Gold Medal and his selection for WorldSkills with the Tool Voucher prize of £500 and a letter of commendation from the Master.

James was originally invited to receive his prize at Midsummer Court Luncheon in July 2020 –but Covid19 intervened and delayed the personal presentation of the prize to James until recently.